Essays on the Intersection of Kids, Culture, and Psychiatric Drugs

Behavioral-developmental pediatrician Lawrence Diller continues his investigation into the widespread use of psychiatric drugs for children in America, an investigation that began with his first book, Running on Ritalin. In this work at hand, Diller delves more deeply into the factors that drive the epidemic of children's psychiatric disorders and medication use today, questioning why these medications are being sought, and why Americans use more of these drugs with children than is used in any other country in the world.

There is relentless pressure for performance and success on children as young as three, Diller acknowledges, but his analysis goes further, and his conclusion is both surprising and ironic. In the name of preserving children's self esteem, American society has become intolerant of minor differences in children's behavior and performance. We worry so much about how our children feel about themselves that struggles once within the realm of normal are now considered abnormal - indicative of a psychiatric or brain disorder, requiring diagnosis and treatment with psychiatric drugs, often for years. The Last Normal Child also addresses the role of drug companies in the advertising and promotion of both disorders and drugs. The pharmaceutical industry has garnered incredible profits and power in influencing the way we view children today. Diller illustrates through vivid and poignant stories of real patients, how he, together with families, make informed decisions about using psychiatric drugs for children. Parents, educators, pediatric and mental health professionals will gain valuable insights, tips and tools for navigating what has become a truly perilous trip of childhood for children in America today.

BUY IT NOW ON AMAZON 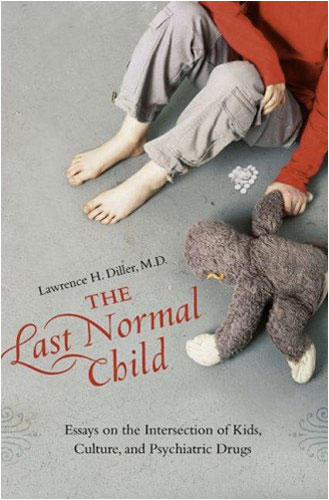