A Physician Reflects on Children, Society and Performance in a Pill

In a book as provocative and newsworthy as Listening to Prozac and Driven to Distraction, a physician speaks out on America's epidemic level of diagnoses for attention deficit disorder, and on the drug that has become almost a symbol of our times: Ritalin.

In 1997 alone, nearly five million people in the United States were prescribed Ritalin--most of them young children diagnosed with attention deficit disorder.

Use of this drug, which is a stimulant related to amphetamine, has increased by 700 percent since 1990. And this phenomenon appears to be uniquely American: 90 percent of the world's Ritalin is used here. Is this a cause for alarm--or simply the case of an effective treatment meeting a newly discovered need? Important medical advance--or drug of abuse, as some critics claim?

Lawrence Diller has written the definitive book about this crucial debate--evenhanded, wide-ranging, and intimate in its knowledge of families, schools, and the pressures of our speeded-up society. As a pediatrician and family therapist, he has evaluated hundreds of children, adolescents, and adults for ADD, and he offers crucial information and treatment options for anyone struggling with this problem.
Running on Ritalin also throws a spotlight on some of our most fundamental values and goals. What does Ritalin say about the old conundrums of nature vs. nurture, free will vs. responsibility? Is ADD a disability that entitles us to special treatment? If our best is not good enough, can we find motivation and success in a pill? Is there still a place for childhood in the performance-driven America of the late nineties?

BUY IT NOW ON AMAZON 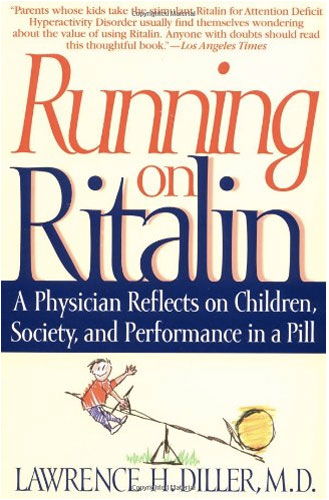