Matthias, a seven year old patient of mine, had his fifteen minutes of fame (though some may describe it as infamy) when he was featured in a front page New York Times article called “One Drug or Two: Parents See Risk and Hope” on November 14, 2015.

I had been working with the Times reporter, Alan Schwarz, for over a year on different articles he had published in the New York Times on ADHD and medication. I felt I knew Alan well when he approached me asking for deep background for another long article. He was contemplating a piece to highlight the lack of scientific data supporting the common practice of using more than one psychiatric drug in children. Because we have virtually no evidence pro or con, in essence we “experiment” with our children when doctors add a second drug. In the course of our discussion I mentioned to Alan that at that very moment I was reluctantly considering prescribing two drugs to two of my patients. Matthias was one of them.

After describing both to Alan, he surprised me by asking whether I would consider offering Matthias as an example of what parents, children and doctors had to face when considering adding a second psychiatric drug. I had been involved with media for nearly twenty years and at various times had included families with whom I worked in either a print or television project. Except for one time (when a father had eagerly sought out to have his family on television), the experience had been a positive one for the child and family. I considered both Matthias and his mother, Joelle, and agreed to ask them.

Joelle and I had already been through a lot together and she readily agreed to meet with Alan. Alan flew out to the West Coast, first met with Joelle, her mother and me and then on a subsequent visit, joined me for one session with Matthias and Joelle. He also visited with them at their home on each of his two visits.

Alan’s primary goal in employing Matthias’s story was to demonstrate the problem of lack of scientific support, complicating decisions for doctors and parents using a second psychiatric drug. He wasn’t writing a clinical case history. Also it isn’t Times’ policy for reporters to share their stories before publication. So when the piece came out, while I was pleased to have a photograph of me playing a game with Matthias and Joelle in my office 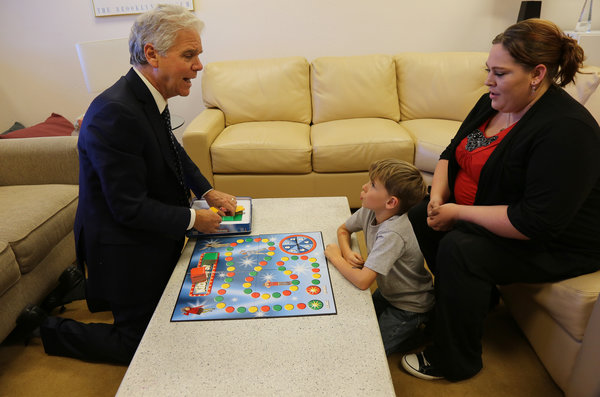 there were aspects of the story – particularly aspects of Matthias’s history left out – that vexed me. While I thought 98% of the Times’ readers wouldn’t care, the 2% that might notice, was a potentially important audience of concerned parents and professionals, which was also an important audience to me.

The article was very explicit and dramatic in describing Matthias’s current behavior/problems. “Matthias can be wonderfully loving, nuzzling his sandy blond head into his mother’s chest and turning his blue eyes up toward her in glee. But without warning, he can explode into fits of anger and despair. His mother has tried several behavior modification strategies and parenting techniques to only modest effect.”

“His triggers are both unpredictable and inexplicable: Water from a faucet turning hot too slowly, or his mother parking in the wrong spot, can send him into fits from which he does not recover for the rest of the day.”

“Although he pays attention at times and has some good days, he can go from explosive to withdrawn to unreachable. He refuses to do math and word exercises, often putting his head on the desk and ignoring even his teacher’s softest encouragement. Most alarming is that during less structured periods, such as recess, he often runs away, disappearing and causing fear for his safety.”

“Matthias threw a fit when his chosen pumpkin was too big to lift. He calmed down, but when all the children gathered to hop on a hayride, he saw a caterpillar in the road and, afraid it might get squished, refused to get on the ride until the creature had crossed to safety. The class waited impatiently. And then Matthias bolted yet again, running from his mother and the entire group faster than anyone could chase him. He ran and ran and ultimately took roost on a distant fence made of haybales, next to a scarecrow.”

Matthias sounds like either a real hellion or very disturbed child depending on your social/cultural mindset. Many doctors and parents would categorize Matthias as having pediatric bipolar disorder (PBD). The correct DSM 5 psychiatric diagnosis for this behavior in a seven-year old is dysphoric mood dysregulation disorder or DMDD. But virtually no one uses this terminology as yet. Most doctors and many parents would simply say that Matthias “was bipolar.”

Whatever you call it, Matthias was already on relatively high doses of Adderall XR, a prescription stimulant drug for ADHD. Thus, in the New York Times article Joelle and I, necessarily given his current behaviors, are considering a second drug, Risperdal. Risperdal is classified as an anti-psychotic -- meaning it originally was tested and gained FDA approval for the treatment of schizophrenia. But it is used much more widely for the control of aggressive and out of control behavior. Risperdal would likely attenuate Matthias’s sense of stress and acting out behavior, but also carry with it significant side effects of sedation, an insatiable appetite for food, a consequent enormous weight gain, and even the risk of developing permanent diabetes.

But missing from the article was a fuller description of the context within which Matthias displayed his problem behaviors.   Alan knew well most of the other problems and had even written about some of them in the article. But his editors in their judgment, removed them from the final piece. I suppose Alan can be faulted (but I do not fault him) for not fighting harder to keep these contextual complications in the story, but I will mention them here as bullets since these corrections are not the main purpose of this report:

Okay. Here’s what happened to Matthias. At the school meeting the IEP tests showed that Matthias scored overall in the below average range of intelligence and that he was a year behind in his academics. The staff agreed he would not be successful in a regular class. An effort began to place him in a Special Day Class (SDC) at another local school where there were only eleven children in the class with one teacher and two aides (his current class had 26 children and one teacher). In the SDC the children’s skills ranged from early kindergarten to second grade. Matthias began attending the SDC in early January 2015 after the winter break for the holidays.

As important if not more, Matthias’s uncle, aunt and two cousins in late November 2014 decided to move out and find their own place. Joelle commented that it was now so much more tranquil at their place after she picked Matthias up from an after school home daycare setting that had only six children around his age.

Last week I decided to call his SDC teacher to hear directly from her on how Matthias was faring in her class. She and I had a 20-minute talk about him. I asked Mrs. A my usual question to teachers, “Tell me how Matthias is doing, strength and weakness-wise, in his academics and behavior in your class.”

She told me “He's working out fine. He's a pleasure to have around. The longer he's here the more he feels included. He knows more than he's giving out. He's a good reading decoder (low for his age) - but he’s good for this particular class. He likes math (he’s below grade level but doing well in everything we ask of him). He is fine behaviorally. Sometimes he gets upset but is very easy to talk down. He has made some friends, gets along, and plays games. It took about a month for him to feel okay with the kids on his own.”

I met Joelle alone this week. She confirmed what Mrs. A said and furthermore noted she really hadn’t had to discipline Matthias at all at home for the last two weeks. It’s been a pleasure and relief for her.   There had been one more change for Matthias’s family. Joelle and I had decided she might benefit from Prozac. She had started it the first week in January. We knew she was not severely depressed or anxious but that it might help her stay more even in the face of continuing stressors at work and dealing with Matthias. Joelle reported, in fact, that after two months on Prozac that she felt quite a bit better. I had watched her a month earlier handle one of Matthias’s tantrums in my office with great evenness and restraint and thought the medicine probably contributed to her equanimity. There have been no side effects.

At the end of our visit I mentioned I might write a follow up on Matthias to alert the public as to what had happened to him (Joelle had and has given me free reign to share anything). She said with a twinkle in her eye, “Well I suppose we did wind up using two drugs, one for Matthias and one for me!”

Far fewer of you will read this follow up on Matthias than read about him in the New York Times. But it’s important for a public “educated” by psychiatrists and the pharmaceutical industry to be reminded that not only drugs, but a child’s environment also affects neurotransmitters and behavior. There are several million children in our country currently taking psychiatric medications. Several hundred thousand take two or more. I’m not saying these drugs don’t help. But they are not the moral equivalent to first trying to address the needs of our children by changing their environments and experience.

Joelle and I are changing Matthias’s medication. We have begun lowering the dosage of his Adderall XR. The medicine affects his appetite and sometimes on his current dosage he seems just “too serious” for a seven year old according to Joelle. I’ll let you know again in a few more months how this latest “experiment” turns out.